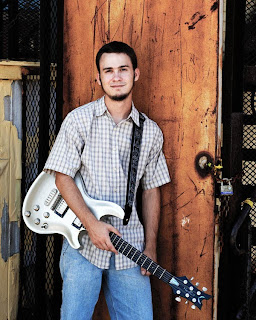 PITTSBURGH—Local high school senior Steve Weir recently announced plans to pursue a career as an unknown session guitarist. Weir, who has played guitar for five years and is a member of both the school jazz band and a heavy metal band called Skank, told friends and family this week that he hopes to parlay his impressive musical ability into a stable career laying down competent, anonymous guitar tracks in exchange for a steady income.
Session musicians, the unsung journeymen of the music industry, are typically used by recording studios to provide (often uncredited) backing tracks for other artists and recordings for advertising, film, and television.

"I just want to make a living in music," Weir said. "Rather than chase the pipe dream of becoming a rock star and ending up working at McDonald's for the rest of my life, I figure I can prepare myself to enter a marketplace where a bunch of different people will pay me to play guitar." In pursuit of this goal, Weir will attend Duquesne University next fall, where he plans to double major in music performance and business management. His parents are reportedly very proud of him.

Weir's announcement came as a shock to best friend and Skank lead singer Craig Nash, who sources say honestly expects Skank to "take over the world" and embark on a stadium tour complete with wild parties and backstage antics that will "make Led Zeppelin look like a church choir." Nash's parents refused to say whether they were proud of their son, but confirmed that he was devastated when Weir told him becoming a famous rock star was "fun to think about" but "not realistic," and that he didn't join Skank to get famous but to hone his skills and gain experience working with other musicians.

Skank drummer Dave Kolb, who joined the band to impress Sally Wilson, and bassist Adam Dupree, who uses band practice as an excuse to smoke weed in Nash's parents' garage, said Weir is "an incredible guitar player" but also "a buzzkill."

Weir outlined plans to develop strong, long-term working relationships with multiple recording studios. He cited the example of Chris Spedding, a versatile and highly respected British session guitarist who worked with thousands of artists during his long career, including Elton John and Paul McCartney. Weir's plans were dismissed as "giving up" by Nash, whose idol Jim Morrison died in a bathtub at age 27 and who says his life's goal is to have sex with more than one woman at the same time.

Weir's high school music teacher, Allen Gill, said Weir is a "dedicated and talented musician" and is "making smart decisions about his future." Guidance counselor Nick Brewster agreed with Gill and added his opinion that "Craig Nash will probably be smoking weed in his parents' garage for the next 40 years." Brewster later claimed he wanted his comment about Nash's drug use to be off the record, but no takesies backsies.
Posted by James J. Hamilton at 2:12 PM