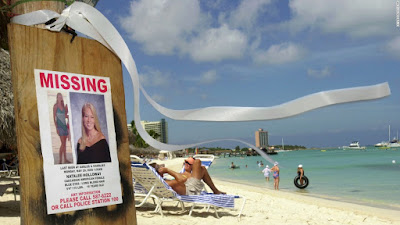 MOUNTAIN BROOK, ALABAMA—Mountain Brook High School is the alma mater of Natalee Holloway, the eighteen year old student who disappeared and was presumably murdered on a senior class trip to Aruba in 2005. Over a decade later, Mountain Brook's Principal Andrew Davis said the school will finally resume senior trips to the Caribbean island. "Students always loved those trips and it's a shame that one bad experience had to ruin it for everyone," Principal Davis said. "We held off for ten years, but I think by now we've made whatever point we were trying to make." Noting that prime suspect Joran van der Sloot recently admitted in undercover footage that he is guilty of Holloway's death, Principal Davis remarked that "We have some closure now, so we should be good to go, right?" When asked what steps the school would take to ensure students' safety in Aruba, Principal Davis said: "Two words: Buddy system."
Posted by James J. Hamilton at 10:49 AM