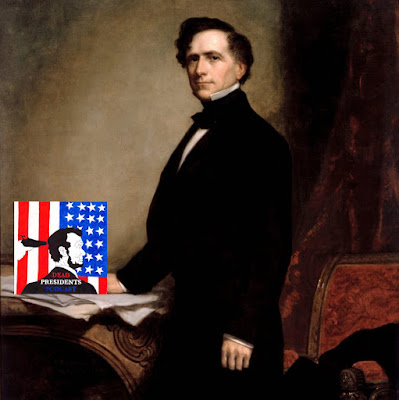 Franklin Pierce was a Democratic congressman, party leader, Mexican-American war hero, and #1 on our list of Top 5 Drunkest Presidents. He was nominated as a compromise candidate in 1852 and, taking office in the wake of a terrible family tragedy, promised not to let slavery re-emerge as a national issue after the sectional crisis of 1850. But when Senator Stephen Douglas came calling with a plan to organize the Kansas-Nebraska territory, Pierce dove headlong into a new sectional crisis and sparked a violent prelude to the coming Civil War. Also: Our list of Top 5 Would Be Presidents looks at some of the most interesting failed presidential candidates and speculates about what might've been had they occupied the White House.
Dead Presidents Podcast Homepage (with links to access the podcast on your favorite podcast app!)
Dead Presidents Podcast RSS Feed
Dead Presidents Podcast on YouTube
Follow the Dead Presidents Podcast on Facebook
Follow @deadprezpodcast on Twitter
Follow @deadprezpodcast on Instagram
We're very proud of all of our wonderful Episode 14 sponsors:
Posted by James J. Hamilton at 12:00 AM