With The Community Rec Center Scheduled To Be Torn Down, The Old Gang Got Together To Bid On The Demolition Work 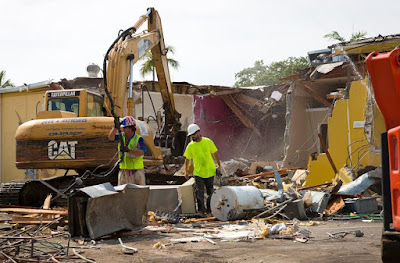 When the city council voted to cut funding for their beloved community rec center and tear it down, the old gang wasn't about to just stand by and watch it happen. They grew up at that rec center! So they resolved to do something: they got together and submitted a bid on the demolition work.

"When I was a kid, the rec center was like a second home to me," said Doug Tolbert, one of the gang's mainstays. "It's where we went for birthday parties, basketball games, heck—I even had my first kiss there. I'll be damned if someone is going to come in and tear it down without me getting a piece of that sweet action."

Tolbert called a gang meeting at the rec center so they could take some measurements and put together an estimate. Longtime gang favorite Nick Stetson cashed in on his construction experience to get a good deal on a wrecking ball rental. With the gang's intimate knowledge of all the rec center's nooks and crannies, no one was better placed to smash it to rubble. Before long, the city council voted to accept their bid.

"We worked like a well-oiled machine," said Jill Easton, the gang's irascible sergeant-at-arms. "Nick unleashed the wrecking ball on the gym. Doug brought down the game room with a controlled burn. I took a sledgehammer to the wall where we carved our names in sixth grade. It couldn't have gone more smoothly."

The gang said they're using the profits from the job to fund a weekend trip to Vegas, where they'll undoubtedly get up to some of their classic shenanigans. The whole thing was such a huge success that the gang resolved to do something else: bid on the electrical installation work for the new Wal-Mart being built on the rec center's lot.
Posted by James J. Hamilton at 12:14 PM