Just days before the game was scheduled to kick off, Pittsburgh comedians learned that the Steel Valley High School football field, longtime home of the Super Fool, was closed for renovations. "Fine," everyone thought, "we'll just find another high school to illegally bring beer to." After extensive deliberations, Woodland Hills High School was chosen for the honor of hosting Super Fool VII, the seventh annual Pittsburgh comedians flag football game.


If anyone kneels during the National Anthem before this game, it'll probably just be because they have a vicious hangover and can barely stand up. Here are the teams:

"I'll be MVP as always," said Hogfather captain Matt Light, who actually hasn't been MVP since 2014. Light said his draft strategy was to pick "the comics I like most." So if Light didn't pick you, it means he doesn't like you that much. The feeling is undoubtedly mutual.

The Gooch captain Brandon Schell personally doesn't give a shit about any of his players, saying he picked them based solely on athleticism. When Light said his team was funnier, Schell countered: "Hopefully you can use dope punchlines to score TDs."

There has been no lack of trash talk in the lead-up to Super Fool VII. Schell said former Brad Ryan Spirit Award winner Tom Musial is "washed up," but Light called him "the steal of the draft" and said he intended to use him like James Harrison. Musial noted that he's already paid his health insurance deductible for the year, so any injuries he suffers can be treated for free.

Schell said he planned to have Derrick Knopsnyder covering Light all game. Light said "good" and posted a photo indicating that Knopsnyder would be choked out "as soon as he opens his mouth." 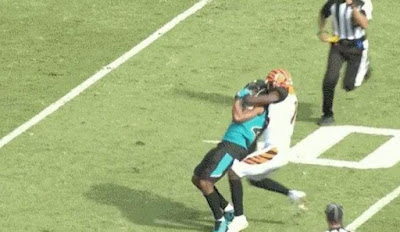 Collin Chamberlin also had a warning for Knopsnyder: "I'm going to destroy you, bitch. This ain't NACA." Chamberlin is coming back to the Super Fool with a vengeance, having lost weight since last year and claiming he's now in good enough shape to run the shallow routes. "I want the rock on Sunday," he said.

Chamberlin's not the only one who's lost weight. "I have the skinny, rejuvenated Ron Renwick," said Schell. Light said the new, emaciated Renwick "looks like a golf tee with his big round-ass head." Renwick could be important to game's outcome given that he is the only player on Schell's team with any Super Fool quarterback experience (one pass attempt) and boasts an all-time perfect passer rating (having thrown a TD on that one pass).

Schell said he would quarterback his own team: "I got cannon baby!" Chamberlin added: "Too bad he doesn't have good grammar." Schell was unfazed: "Tight spirals, loose buttholes!"

One major storyline for Super Fool VII will be the consequences of the blockbuster trade that occurred immediately following the draft. After Schell accepted Light's offer to swap Joey Welsh and Ramsey Daniels for Senneca Stone and Valerie Gauvain, Light revealed that Stone had played quarterback in high school. Schell said that's fine, as Stone "hasn't been in high school for fifteen years." Light pointed out that Stone's quarterback experience was nevertheless fifteen years more recent than anyone on Schell's team. "I gave you Senneca because your team sucked," Schell said.

Light has such confidence in Stone that he traded for him even though it meant also accepting a woman on his roster.

Valerie Gauvain will have an opportunity to shove it in the faces of these chauvinist pigs and will be looking to follow in the footsteps of Blair Parker, who was the last overall pick in Super Fool VI but proved everyone wrong and took home the Brad Ryan Spirit Award.

With so many Super Fool first-timers whose skill levels are unknown, speculation is rampant. Ray Zawodni opined that "Ramsey Daniels might be good as long as he doesn't catch gay." On Sunday, Daniels will have an opportunity to show the world whether his catching skills are in fact gay.

Also making his Super Fool debut, Ian McIntosh is up against the assumption that he'll be good just because he's black, but he's mainly happy it's flag football and not tackle, because then his mom wouldn't have let him play. Schell said McIntosh is skinny so he should be able to run well, but McIntosh said he has asthma and is allergic to grass. We'll find out on Sunday if he was joking or if his throat will close up. Either way, it should be a good game.