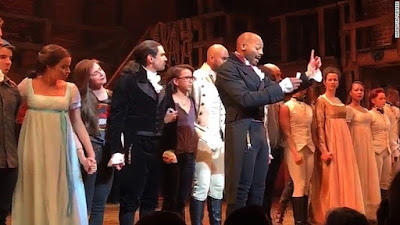 NEW YORK—When Vice President-elect Mike Pence attended the hit broadway musical "Hamilton" on Friday night, the cast took a timeout from the performance to publicly denounce him for ruining the play by revealing the spoiler that Alexander Hamilton dies at the end in a duel with Aaron Burr.

Sources say Pence, while standing in the crowded lobby before the play, said out loud to his wife that he was looking forward the scene in which Hamilton is killed by Burr, adding that he hoped the performance would capture the intense drama of the actual historical event.

Pence's comments were overheard by his fellow playgoers, many of whom were understandably outraged at having spent thousands of dollars on tickets to a play only to have Pence spoil it by blabbing about the ending.

President-elect Donald Trump demanded that the "Hamilton" cast apologize to Pence, but no one should listen to Trump, because he's probably the type of inconsiderate jerk who will be standing in line on opening night of Rogue One: A Star Wars Story, loudly announcing to Melania that the rebels get away with the Death Star plans at the end.
Posted by James J. Hamilton at 2:31 PM