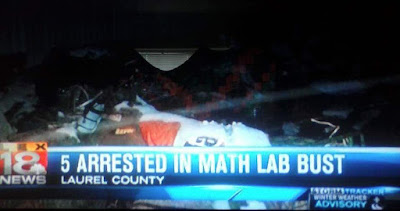 "Neighbors been complainin bout multiplication and long division goin on round that house awhile, but nothin really come of it. However when we got wind they was doin trigonometry and multivariable calculus up in there, we called the SWAT Team straightaway and put a stop to it. Can't have that type a thing goin on same neighborhood as our children play in. You wouldn't believe the stuff we pulled outta there. Compasses, protractors, reams upon reams of graphing paper, more calculators than a man could count. Posters of Einstein all over the place. Down the basement there was a box may or may not've had a dead cat in it. We're still fuzzy on that. Arrested five people. One of em had equations writ all across his bedroom wall. When we threw him in the squad car he kept hollerin something bout fractal dimensions. Anothern had done put the quadratic formula into a TI-83 graphing calculator. Thing didn't come preprogrammed with it, he just figured out how to do it and programmed it in there hisself, for no good goddamned reason I can deduce. That's the level of depravity we're dealin with."
Posted by James J. Hamilton at 10:52 AM