Captains Matt Light and Dustin Dowling got together at the Beerhive open mic on Wednesday night to draft their teams. Here is a preview of the matchup:

"I look forward to this game every year and you ruined it," said Collin Chamberlin to his team's captain Dustin Dowling. "Though it's my fault because I'm the one who suggested that Dustin be a captain," he lamented, watching in horror as Dowling drafted a team oddsmakers are already calling one of the biggest underdogs in Super Fool history. "I can't believe you took Ray Zawodni before Ed Bailey or Will Ness," Chamberlin said. "We need speed!" he added in response to Dowling's fifth round pick of Brandon Schell. Dowling replied: "I'm the speed!"

The Rockettes are going to need more speed than Dowling alone can provide, however, given that Matt Light's Girthquakes are headlined by three players who have earned MVP honors in the last six Super Fools. A three-time MVP himself, Light quickly added Bailey and Ness to his roster and declared that he was already a three-score favorite before Dowling had made his second pick. Light has his eye on a fourth MVP award, saying he plans to play quarterback and lead his team to victory with 12 touchdowns and a perfect passer rating.

Dowling's teammates were dismayed to find that their team is uniformly white, while the Girthquakes landed all three and a half black guys. Light said he hates the New England Patriots (the NFL's whitest team) so much that he drafted all the non-white players to be their opposite. Light noted, however, the Super Fool's historic trend of black players who get drafted but don't show up for the game. Ian McIntosh was a no-show last year and two-time MVP Ed Bailey is already questionable for Sunday. The Girthquakes' status as heavy favorites will be in doubt if the stacked roster Light drafted is not on the field at gametime.

The Rookie of the Year award was created last year and Super Fool VIII features a crowded field of first-timers vying for the honor. Many observers have high expectations for former high school football player Matt Parsons, who said he's the only athlete on the Rockettes. Though he denied that his experience as a combat veteran would help him on the gridiron, he said "I'll do my best for America." Light said "My team can't be stopped by John Cena."

The Girthquakes' rookie Joey Purse lettered in high school football, but a skeptical Light speculated that you can letter by playing one or two plays a game on special teams. We'll find out on Sunday whether Purse's white or black half predominates. 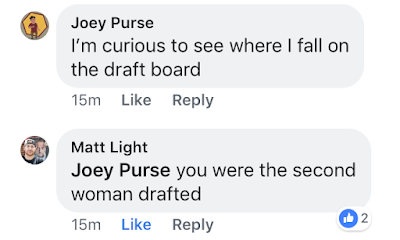 Though the Girthquakes have the only two ladies with Super Fool experience in Valerie Gauvain and Amanda Averell, the Rockettes' rookies Kayleigh Dumas and Paige Polesnak are pumped to take the field and discussed plans to team up and "clothesline motherfuckers." A veteran of soccer and basketball, Dumas said she is "very good at catching" and "gets very angry." Polesnak said her collegiate rugby experience will translate to flag football, and she may have a secret play in the works, though she denied the existence of any secret play after realizing a reporter was listening.

THE ANNALS (ANALS?) OF SUPER FOOL HISTORY
With this year's participants gearing up for their chance at achieving football immortality, now is a perfect time to reflect on the Super Fool’s storied history, a history that has been preserved for posterity by the tireless efforts of the founder and sole member of the Pittsburgh Comedy Intramural Sportswriters Association (“PCISA”). Collected in one place for the first time, here is the record of Super Fools past:

Super Fool I (2011)
Not much is known about Super Fool I, as it is the only “prehistoric” Super Fool, occurring undocumented because it predated the founding of the PCISA. Legends say that the inaugural game was not flag football but tackle, a rule that was changed for future Super Fools because Brad Ryan broke his arm in a collision with Terry Jones.