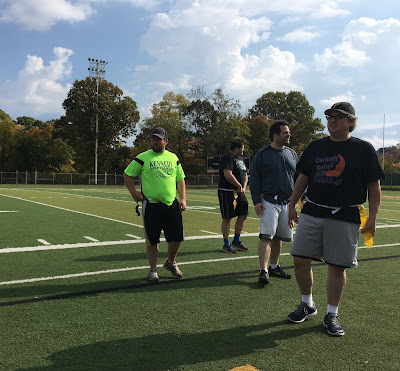 PITTSBURGH—The sixth annual Pittsburgh comedians' flag football game almost didn't happen. "Let's just Snapchat a few plays and pretend we played the game," said Mike Sasson. With five of the eventual fourteen participants showing up late, it was almost an hour after the scheduled kickoff time before there were enough people to play. "I wish I had some wine right now," said Matt Light in pregame warm-ups. Most of the players appeared to be severely hungover and more than one reported snorting cocaine night before. So, a typical Super Fool Sunday.

After winning the coin toss, Degeneration X marched down the field, only to have quarterback Ray Zawodni's pass intended for Matt Light intercepted in the endzone by Ed Bailey.

Mike Sasson Show quarterback Matt Stanton took advantage of having former MVPs Bailey and Will Ness in his receiving corps, targeting them heavily on a seven-play drive that ended with a touchdown reception by Bailey.

Degeneration X kept pace on its ensuing possession, with Zawodni hitting Light with a long bomb for a touchdown.

The Mike Sasson Show wasted no time responding, with Stanton throwing a touchdown pass to Ness. "Look at that lasso dick swinging around in the endzone!" said Alex Homyak.

Degeneration X evened the score again, with Collin Chamberlin gaining a first down and then catching another pass for a touchdown. 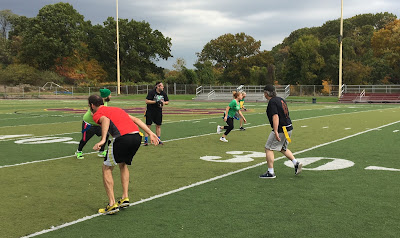 The Mike Sasson Show offense continued to be unstoppable on its next possession, with Bailey beating Light to haul in a jump-ball in the endzone.

On the next drive, after having his touchdown called back because of a forward lateral from Dustin Dowling, Zawodni kept Degeneration X in the game by connecting with Blair Parker for a touchdown pass.

At this point in the game, the Homestead skies darkened and the field was beset by strong winds and pouring rain. "This is more fun than Super Fool II," said Shannon Norman, "when I got loaded on malt liquor and broke up with my girlfriend." The game had been neck-and-neck thus far, but Mike Sasson Show's Stanton and Bailey were about to take over and roll their team to victory.

After hitting Bailey for their third touchdown connection of the game, Stanton turned the tables on Degeneration X by intercepting Zawodni on the first play of the ensuing drive. One play later, Bailey caught yet another touchdown pass from Stanton to ice the game. 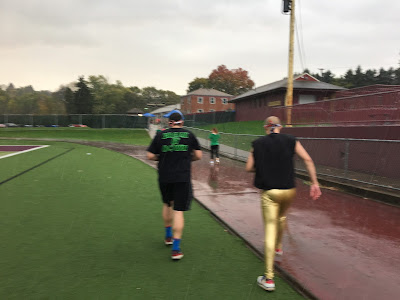 As soon as the final point was scored, players ran to the parking lot to take cover from the downpour, not sticking around for post-game interviews, a group photo, or even to trash-talk each other. Though his team won the Super Fool, Will Ness lost by leaving his sunroof open during the rainstorm.
Mike Sasson Show captain Mike Sasson should be credited for putting together a championship roster. He drafted his players based on heart and athleticism, as opposed to Light, who picked those he most wanted to get drunk with or have sex with. Sasson's last minute acquisition of undrafted free agent Matt Stanton to replace no-show Ron Renwick was a game-changer. Stanton, the runner-up in MVP voting, took over at quarterback—the big question mark on Sasson's roster—and turned in a flawless performance, throwing a touchdown pass on every possession while avoiding costly turnovers. Sasson noted that two NFL GMs hail from his alma mater UConn. Super Fool VI shows that the NFL may be ready for a third.
Degeneration X captain Matt Light entered the game expecting a third straight Super Fool victory and third MVP trophy, but he was handed a crushing defeat instead. He scored his team's first touchdown (his only reception), but spent the rest of the game dropping an easy interception and getting posterized by Ed Bailey, who Light passed on with the first overall pick. Maybe Light would've played better if he hadn't stayed up until 7:00 a.m. the night before getting drunk while dressed as French maid Hitler. As the only person who actually cares about this game, Light will have an entire year to live with the shame of his ignominious Super Fool defeat. "I hate losing," said Light as he walked dejectedly to his car in the rain. At least he won an award for his Halloween costume, presumably for being the only person awful enough that he can dress up as Hitler and it’s demeaning to Hitler. 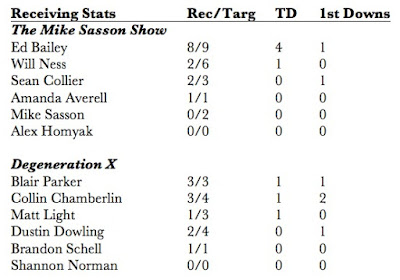 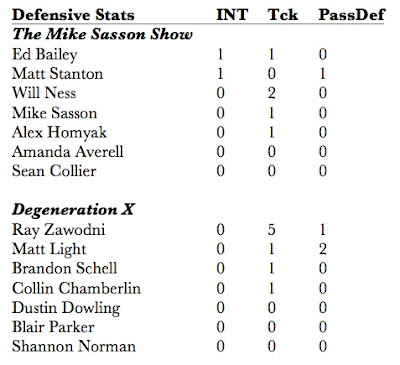 Almost all of the participants in Super Fool VI made their mark on the stat sheet. Even Alex Homyak, who had vowed to “ride a tsunami of vodka onto the field,” registered a tackle. The only player to be shut out in all official categories was Shannon Norman. Norman’s stats read like Bluto Blutarsky’s grades: Zero point zero.
Unfortunately for Norman, the Super Fool’s statisticians do not keep official stats for talking on your cell phone on the field in the middle of a play. “No, I can talk now,” Norman said to the person on the other end of his call (presumably a drug dealer) while the Mike Sasson Show marched down the field for yet another touchdown. Norman was also the unofficial leader in cases of Iron City Light brought, with a league-high one. “Help yourself to an IC Light, guys, they’re under the jean jacket,” Norman said. Zawodni replied “I feel like that’s a sentence you’ve said many times in your life.”

Awards are voted on by the Pittsburgh Comedy Intramural Sports Writers' Association.

With 8 receptions, 4 touchdown catches, and an interception, Ed Bailey ran away with the MVP award, turning in what was perhaps the most dominating performance in Super Fool history. "This is the Ed Bailey show," said Homyak after one of Bailey's many touchdowns. "He is beating the fuck out of me," said Light, who had the unfortunate job of trying to cover Bailey for most of the afternoon. Bailey adds this award to his Super Fool III MVP, tying Light as the only other player with two MVPs.

The Brad Ryan Spirit Award is given to a player who left it all on the field. This year's BSRA goes to Blair Parker, the last overall pick.

"What are the rules for puking on the field? Is that allowed?" asked Parker, who showed up covered in glitter from what this reporter will presume was a Halloween costume and not the late shift at Club Erotica. Reportedly nursing a vicious hangover, Parker nevertheless brought intensity to her first Super Fool. Instead of calling for the ball by saying "I'm open," she yelled "Yo! What the fuck!" That approach apparently got the attention of her team's quarterback, as only MVP Ed Bailey caught more passes than her. Overcoming rampant sexism, Parker celebrated her touchdown catch by chanting "I was picked last! I was picked last!" It's safe to say that Parker, who almost threw up in the car on the way to the game, will not be picked last again next year. "She is a savage," said Light.

Despite suffering a separated shoulder toward the end of the game, Dustin Dowling only finished second in BRSA voting. Dowling separates his shoulder so often (he did it in pregame warm-ups too) that nobody cares anymore, as evidenced by the fact that everyone just left him laying on the turf, with no one really worried about him. If you want the BRSA, you better get hurt bad enough to go to the hospital, like Brad Ryan did twice. Otherwise, you’re just a pussy.

For the third straight year, this award goes to James J. Hamilton. Without him, the Super Fool would be the proverbial tree falling in the forest without making a sound.
Posted by James J. Hamilton at 3:31 PM