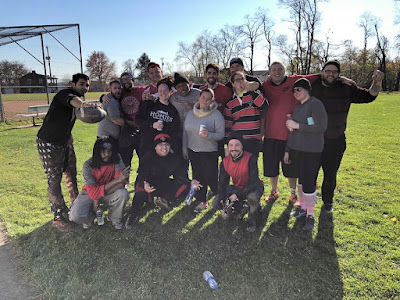 PITTSBURGH--"Comedy's really changed," said Collin Chamberlin during pregame warm-ups. "Brad Ryan used to bring bags of wine, now we've got coconut LaCroix." Water, gatorade, and coconut LaCroix were the healthy options, but Chamberlin was wrong. Some things never change: there turned out to be no shortage of alcohol on school property while kids practiced on the other half of the field. Someone brought beer, someone brought a 40. "Mine's a sparkletini," said Paige Polesnak. 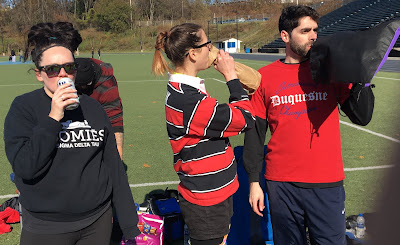 Super Fool VIII promised to be a clash of titans. Last year's co-MVPs Matt Light and Ray Zawodni would go head-to-head quarterbacking rival teams. "I'll be MVP again," said Light. "I'm a natural leader," said Zawodni. "Let me know if you want to do an in-depth profile about me as a competitor." Pittsburgh comedy's quarterbacks even drew comparisons to NFL superstars: "You're Fat Mahomes," Light told Zawodni. "And I'm Fat Ryan."

With two-time MVP Ed Bailey inactive, Light's heavily-favored Girthquakes looked vulnerable and Dustin Dowling's underdog Rockettes were ready to strike. Chamberlin said the Girthquakes were "strained up" and put a bounty on Will Ness: "Five extra minutes at Beerhive to whoever takes Will out." Brandon Schell told Light: "I hope you tear your achilles." The players' intensity would make this Super Fool one for the ages.

The Rockettes won the toss and took the ball first. On the second play, Andreas O'Rourke ripped the crotch of his American flag pants trying to cover Daniel Ferrere. "At least you can go to the party store and replace them for three bucks," said Chamberlin. Matt Parsons found O'Rourke's ripped, mud-stained American flag pants disrespectful: "It's Veteran's Day," reminded combat veteran Parsons, who responded by catching a pass from Zawodni for the first score of the game.
The Girthquakes struck back quickly when Ian McIntosh hauled in long bomb from Light to even the score. "I'm the baddest motherfucker in the league," said Light. Dowling found the end zone on the Rockettes' next drive, and the Girthquakes kept pace when Light connected with Will Ness to make it 2-2.

At that point, a dad with the high school girls' soccer practice on the other side of the field took issue with the frequent F-bombs punctuating the comedians' gridiron exertions (we can't be expected to work clean). In an unprecedented move, Super Fool VIII's participants picked up and drove to a new field a mile down the road, reconvening at Forest Hills Rec Center, right behind a police station, where they could shout obscenities to their hearts' content.
The move also meant turf was exchanged for muddy grass, a change that had big implications on the game, with many players struggling to gain a foothold on the wet field.

When the game restarted, the Girthquakes came out swinging. Zawodni's pass to Daniel Ferrere was tipped up into the air and intercepted by Will Ness, and Light capitalized on the turnover by hitting Joey Purse for the go-ahead touchdown. On the ensuing drive, Brandon Schell made a first down catch and revealed some serious plumber's crack as he was brought down by defenders. Ferrere scored on the next play to even the score 3-3.

The Girthquakes kept on rolling with another Light touchdown pass to Ness. "This shit's easy," said Light. The Rockettes' offense failed to get a first down and gave the ball away, but their defense made up for it when Zawodni intercepted Light to retake possession and followed through with a scoring strike to Dowling.

With the first half clock winding down, Light went into his two-minute drill, scrambling for a long gain and hitting O'Rourke to take the ball to the goal line. But the Rockettes' defense held firm and forced three straight incompletions to close out the half in a 4-4 tie.

As time ran out, Dowling's shoulder popped out of its socket for the second time. Happening multiple times every year, it is one of the most persistent Super Fool traditions and has become more annoying than concerning: "Dustin's shoulder is my least favorite thing about this game," said Zawodni. Dowling soldiered on.

The Girthquakes opened the second half with O'Rourke subbing in at quarterback and throwing a hail mary that just missed a streaking Light. "Send it you pussy," Light called for the ball. The Rockettes forced a turnover on downs and scored on a quick drive consisting of two Zawodni passes to Ferrere, who juked McIntosh for a long gain then followed up with a touchdown on the next play.

Light was back at quarterback on the Girthquakes' next possession, throwing a highlight-reel bomb that was bobbled by Ness, tipped by Ferrere, then finally hauled in by Ness. Marcus Cox added a touchdown on the next play. The Rockettes struck back with a Chamberlin touchdown, then McIntosh caught his second score from Light and made it 6-6.

On the next drive, a deep Zawodni pass went through Ferrere's hands, the rookie's third big drop of the afternoon. That drop would be his last, however, as Ferrere responded by hauling in two catches and taking the ball down to the goal line, where Dowling added a touchdown grab. The Girthquakes battled back and scored when Purse came down with a tipped ball.

The Rockettes took a 8-7 lead with another Ferrere touchdown catch-and-run. "Of course he's fast" Schell said of Ferrere. "He doesn't smoke. He's skinny with healthy lungs."

With the offenses trading scores back and forth, it was time for a big defensive play to shift the game's momentum: Kayleigh Dumas stepped up to intercept Light's pass and ran a long return into the red zone. The Rockettes scored on the next play when Zawodni found Chamberlin in the end zone, making it 9-7 and giving their team the first two score lead of the day.

Light bounced back from his interception and refused to give up, rallying his team with a long touchdown strike to Purse, who finished second in Rookie of the Year voting despite reportedly almost tearing his ACL twice (worth it).

"Let's fucking go!" Light said, carrying his intensity to the defensive side of the ball and forcing a turnover on downs by breaking up Zawodni's would-be first down pass.

With time running out, Light took the ball back determined to score. Schell noted that Light had a "furrowed brow" and was making "the face he makes right before he fucks." Light proceeded to fuck the Rockettes' defense, connecting with O'Rourke to get the ball to the goal line, then throwing the game-tying touchdown to Will Ness.

The Rockettes didn't have time to get a drive going and the regulation clock expired with the score tied 9-9, resulting in the first sudden death overtime in Super Fool history.

The Rockettes won the toss and got the ball first, but the Girthquakes' defense made a big time stop and forced a turnover on downs. Zawodni castigated himself: "Stupid play, Raymond."

Taking the ball back with a chance to end the game, Light had his fourth MVP award in his sights. But his rival captain Dowling, who was sharply criticized for his draft strategy, stepped up in the game's biggest moment and picked off Light. "Let's go, wooooooo!" he exclaimed, continuing the momentum to the ensuing drive, where he caught Zawodni's pass for the game-clinching touchdown.

In perhaps the closest, hardest fought, and muddiest game in Super Fool history, the underdog Rockettes pulled off a stunning upset. They mobbed each other and danced while the Girthquakes filed off the field in shame. "We couldn't get it done," said standout rookie O'Rourke, his tattered flag pants covered in mud. "We just didn't execute." Losing captain Matt Light was devastated: "I'm gonna go home and jerk off."
FINAL SCORE 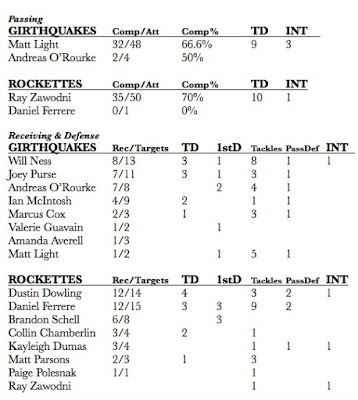 Awards are voted on by the Pittsburgh Comedy Intramural Sportswriters' Association (PCISA). 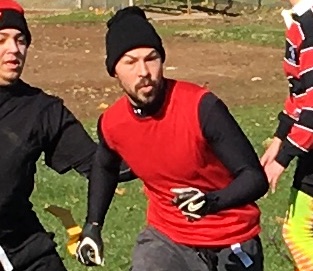 After many years of strong Super Fool play, winning captain Dustin Dowling stepped up into the MVP ranks with a great all-around performance and last minute heroics. Battling through two shoulder separations, he led his team in receptions and touchdown catches, made crucial defensive plays, and came up big at the game's most critical moments. His interception and overtime touchdown capped off a triumphant afternoon and secured Dowling's place as a Super Fool legend. 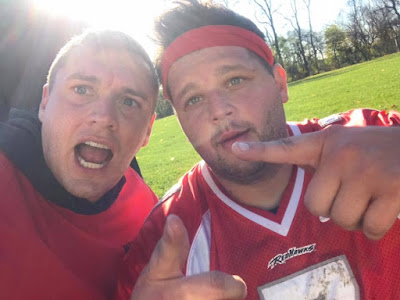 Ray Zawodni finished a close second in MVP voting and continued his reign as the greatest quarterback in Super Fool history, posting a 70% completion percentage, 10 touchdowns, and only 1 interception which, as he pointed out, wasn't his fault because it was bobbled by the receiver. Zawodni is the Super Fool's greatest winner, with victories in 5 of the last 6 years, including a threepeat as captain of Zawodni & Sons. He also thought Will Ness looked good in his new athletic gear: "I want to fuck you right now." 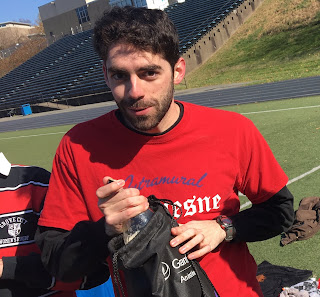 Daniel Ferrere earned Rookie of the Year and Defensive Player of the Year honors with strong two-way play, posting a game-high 9 tackles and adding 12 receptions and 3 touchdowns. He was all over the field, contributing in all phases of the game and making clutch plays to help put his team over the top. Ferrere's breakout success may be partially attributed to the 40 he drank during pregame warm-ups. As Billy Dee Williams says: "Colt 45 works every time." 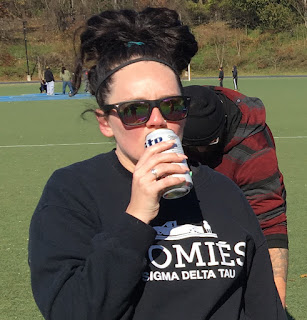 The Brad Ryan Spirit Award is given to a player who left it all on the field. This year's BRSA goes to Kayleigh Dumas, who began the afternoon inauspiciously by tripping herself and slipping in mud. "I just wish I could do one good thing without falling on my ass," she said. Her wish came true when she made a huge fourth quarter interception that shifted the game and brought her team within the reach of victory. She tried to downplay the pick, saying Light "literally threw it directly to me," but her teammates recognized it as "an epic play" and "a game changer." "Is it obvious I don't exercise much?" she asked, laying on the ground to catch her breath after the big play. "There's a leaf in my hair."

The Brad Ryan Spirit Award is brought to you in part by Brad Ryan, Super Fool legend:

Though Super Fool fever is strong and there's no known cure, nine out of ten doctors agree Brad should not come out of retirement.
Posted by James J. Hamilton at 8:00 AM