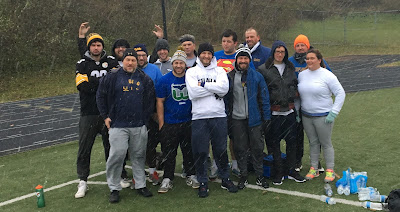 Pittsburgh's comedians couldn't have been more excited to participate in their seventh-annual flag football game: "I'm angry that I'm here," said Sean Collier. "I'm too fat to wear these flags," said Brandon Schell. "I have an inhaler if anyone needs it," said Valerie Gauvain. From the outset, Super Fool VII was shaping up to be another classic display of apathetic athleticism.

Getting ready for kickoff, the participants couldn't avoid contemplating the storied history of Super Fools past: "Is this Brad Ryan's blood on these flags?" asked Collier. "If it's blood, it's definitely Brad Ryan's," confirmed Will Ness. Multiple players would seek to follow in Brad Ryan's footsteps that afternoon, with Dustin Dowling getting off to an early start by separating his shoulder (for the first time) in pregame warm-ups: "I didn't think it would come out that easy," he said. Things would just go downhill from there.

The Gooch took the ball for the game's opening possession with their captain Brandon Schell under center. Schell started fast with two completions each to Will Ness and Derrick Knopsnyder, before a blitzing Matt Light forced him to throw an errant pass that was intercepted by Ray Zawodni.

On the Hogfathers' first possession, veteran quarterback Zawodni completed a long pass to Senneca Stone, who was on his way to a touchdown when Ness grabbed his flag at the goalline. On the next play, Zawodni connected with Light for the game's first score.

The Gooch struck back on the next drive, with Schell throwing a touchdown pass to Ness. When the Hogfathers got the ball back, Zawodni scrambled past a blitzing Sean Collier and ran it into the endzone. Schell and Ness wasted no time hooking up for another touchdown to tie the game 2-2.

Things were dead even thus far, but momentum was shifting. After forcing a turnover on downs and pulling ahead on a Ron Renwick touchdown reception, the Gooch were about to score the game's first defensive touchdown. Having scrambled for one score already, Hogfather quarterback Zawodni got cocky when Valerie Gauvain took over on the pass rush: "I'm the Andy Kaufman of flag football," Zawodni said. "I'm only good against women." On the ensuing play, Zawodni would eat his words when he completed a short pass to Dustin Dowling and the two lost control of the ball on a botched backward lateral attempt. Gauvain recovered the fumble and walked it into the endzone. "Suck it, you fuckers," she said. 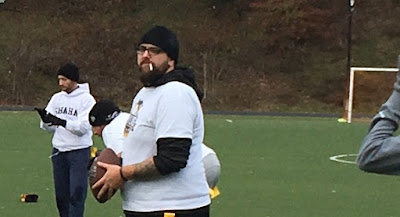 The Gooch forced another turnover on downs and took a 5-2 lead when Schell (with a lit cigarette in his mouth) hit Ness for the pair's third touchdown of the half.

With everything going against the Hogfathers, captain Matt Light took over at quarterback determined to be his team's savior: "I don't believe in God, but I have Jesus socks on." 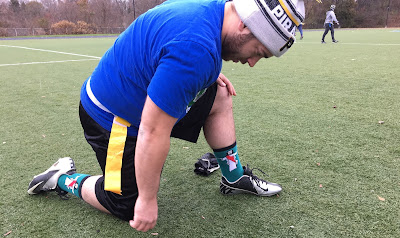 Light helped turn the tide by closing out the half with five completions on six attempts and capping off three consecutive scoring drives with touchdown passes to Zawodni, Stone, and Dowling. The Hogfathers' defense also picked up the pace when Stone intercepted a pass from Schell, enabling his team to even the score before the halftime buzzer sounded.

The Hogfathers opened the second half with Zawodni back at quarterback and took the lead when he threw a touchdown pass to Light. On the next drive, Knopsnyder hauled in a Schell pass and was running down the sideline when Ramsey Daniels went in for the tackle and came up with a flag. However, it took a moment for everyone to realize that flag didn't belong to Knopsnyder, who in the meantime walked into the endzone unscathed.

The teams kept pace when touchdown passes from Zawodni to Dowling and Schell to Ness made the score 7-7. Dowling's exuberant post-touchdown celebration caused his shoulder to pop out for the second time and it took both Tom Musial and Erick Williams to help pop it back in. "That's never needed two people before," said Dowling. 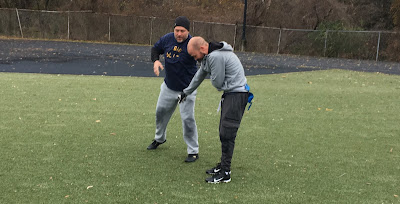 With the score tied 7-7, the teams were neck and neck. At this point in the game, however, the Hogfathers stepped up and took control. Light connected with Stone for the first of six unanswered scores. Zawodni threw touchdowns to Light, Daniels, and Dowling, then torched Schell for his second rushing touchdown of the day. "I didn't think he was that fast," said Schell. "He looks like 2009 Ben Roethlisberger," said Light.

The Hogfathers' 6-0 run was made possible by their opportunistic defense, which ended four consecutive Gooch drives with interceptions. Musial and Daniels had the first two picks while Dowling added the next two, the last returned for a touchdown.

With the Hogfathers up 13-7 and time running short, the game was essentially over. Derrick Knopsnyder took over at quarterback for the Gooch and connected with Will Ness, who took it in for his fifth touchdown reception of the afternoon. Ron Renwick intercepted Zawodni and scored a garbage time pick-six touchdown. "Ron is more surprised than anyone," said Ness. Tom Musial closed out the scoresheet when he hauled in a Zawodni pass and managed to stay in bounds on his way to the endzone. The Gooch tried to mount one more drive, but the clock expired. 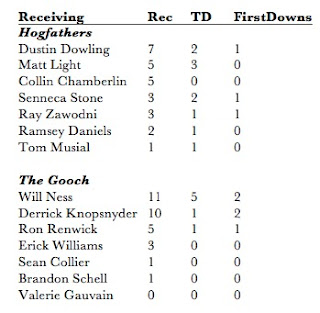 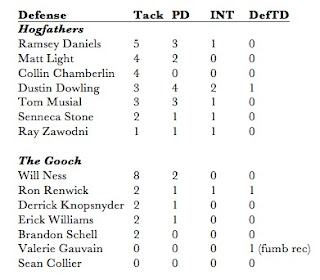 Awards are voted on by the Pittsburgh Comedy Intramural Sportswriters Association. 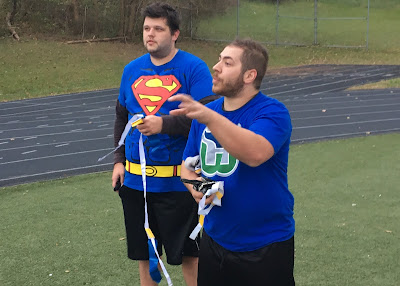 For the first time in Super Fool history, the MVP award is shared by two players. It is only fitting that those two are Matt Light and Ray Zawodni, whose homoerotic bromance has led them to fix the draft every year so they end up on same team. Light claims to be the Shawn Michaels to Zawodni's Marty Jannetty, and the two always have each other's backs. When Light said "I don't think I'd be good at sucking dick," Zawodni quickly corrected him: "No, you're great at it."

It was impossible to choose between Light and Zawodni for the game's top player, as they were both instrumental to their team's win. With the exception of Dowling's interception return touchdown, they had a hand in every one of the Hogfathers' scoring plays.

Zawodni had ten total touchdowns and was all over the field, dominating in all phases of the game. He became the first player in Super Fool history to score passing, rushing, and receiving touchdowns in one half. He also protected the football as quarterback, giving up only one interception on 37 pass attempts, and added an interception of his own on defense.

Light was his team's most dangerous receiver, hauling in three touchdowns, and his near-perfect stint at quarterback came at a critical time and got the Hogfathers back in the game. He also turned in a self-described Richard Sherman-like performance on defense, with the Gooch failing to complete any passes toward his half of the field.

Light and Zawodni were not satisfied with their Super Fool success, but rather determined to let it ride: "Fuck Disney World," Light said. "We're going to Rivers Casino."

While they couldn't have done it without the help of their teammates, Light and Zawodni owe special thanks to the one person most responsible for making their MVP award possible: the trucker who hit Ed Bailey. 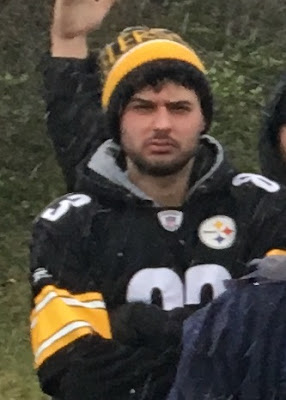 One player's standout performance inspired the Pittsburgh Comedy Intramural Sportswriters Association to create two new awards to give to him. The winner of the first Rookie Of The Year and Defensive Player Of The Year awards is Ramsey Daniels.

Super Fool newcomer Daniels entered the game as an unknown but walked off the field as a gridiron star. Some speculated that he might "catch gay," but there was nothing gay about his debut performance on Sunday, except for the enthusiasm with which his "man-grabbing hands" stifled opponents. Referred to as "a tackling machine," Daniels led his team in tackles and added an interception and a receiving touchdown.

Daniels spent the afternoon matched up against the Gooch's most dominant player Will Ness, with the two engaging in one of the most hard-fought one-on-one battles in Super Fool history. While Ness turned in a game-high 11-catch, 5-touchdown performance, there's no telling how many more times he might have scored had Daniels not been all over him, as no one else had the height or grit to stop him. The highlight of their battle came when Tom Musial intercepted a pass and Daniels knocked Ness to the ground with a Hines Ward-like crackback block. 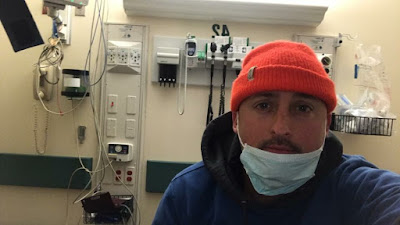 Named in honor of Brad Ryan, who suffered a broken arm in Super Fool I, the Brad Ryan Spirit Award is given to a player who left it all on the field. While Dustin Dowling had his eye on it with his multiple shoulder separations, Senneca Stone ran away with this year's BRSA when he was knocked out of the game in the second half. In the midst of the Hogfathers' 6-0 run, Stone went up to pull in a Zawodni pass and came down with a possible concussion. "His head looked like a cantaloupe hitting the ground," said Light. After completing the Super Fool concussion protocol with a visit to the hospital (in classic Brad Ryan style), Stone now reports that he is okay. But his injury initially worried his teammates, with Collin Chamberlin checking up on him to "make sure he didn't go to sleep in the woods." When asked if he needed a ride home, Stone reportedly didn't remember whether he had driven himself to the field. Zawodni said: "I just asked Senneca if he was okay and he said 'Who's Senneca?'"