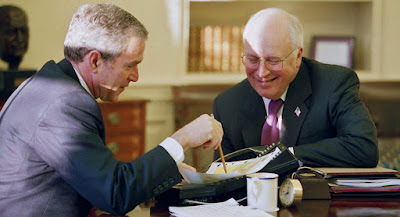 CHENEY
Actually, no—our structural engineers have determined that crashing planes into the Twin Towers won’t cause them to collapse. Even if the planes are full of jet fuel, the fires wouldn’t burn hot enough to collapse the buildings, so we're also going to have them wired with explosives.

BUSH
Go big or go home, right. But why do we need the planes then? If we’re going to collapse the buildings with explosives, why fly planes into them first? Couldn’t we just make it look like terrorists blew them up with explosives? They did try to do that in 1993, right?

CHENEY
Yes, that’s it—apart from the demolition of Building 7.

CHENEY
We’re making it look like heroic passengers took the plane back from the hijackers. Everyone can rally around that and it’ll be a great first step towards war.