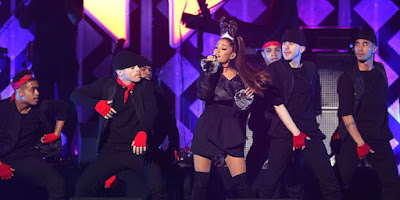 5. San Francisco, CA - September 8, 2015
Battling a cold and cough, Grande looked lost amid a too-busy stage production at the Shoreline Amphitheater. Fireworks and special effects couldn't make up for the pop diva's lack of charisma and her failure to interact with fans.

3. St. Paul, MN - March 1, 2015
Grande's voice is her strong suit, but it was buried beneath an over-produced show marred by bad lighting, bad costumes, and too many backup dancers. And who thought distorted vocal effects would be a good idea?

2. Manchester, UK - May 22, 2017
Suicide bomber Salman Abedi blew himself up during Grande's concert at Manchester Arena, killing 22 people and injuring 119 others. The victims included many children and teenagers. ISIS claimed responsibility for the attack.

1. San Jose, CA - March 27, 2017
Barely visible on a dimly-lit stage with an overactive fog machine, Grande drifted through song after subpar song, her phoned-in vocals failing to reach the heights of the studio versions. Performing a bad setlist with lots of filler, the singer showed zero personality and made no attempt to connect with the crowd.
Posted by James J. Hamilton at 9:31 AM