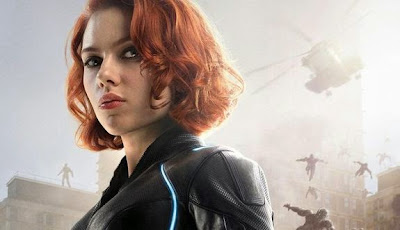 While audiences are raving about the non-stop action and exciting new characters jam-packed into Avengers: Age Of Ultron, which opened in the U.S. this past weekend and has already made an estimated $627 million worldwide, rabid fans are also talking about what's not in the film, including deleted scenes featuring Thor's villainous brother Loki, the absence of a post-credits scene, and a reported subplot exploring Black Widow's virulent racism.

"If you read the comics the way I do," said Scarlett Johansson in an exclusive interview, "it's clear that Black Widow is a horrible racist." Johansson (who plays the Russian assassin) reported that, while there was nothing about Black Widow's racism in the script, she felt compelled to improvise repeated references to the character's irrational hatred of blacks, Jews, Arabs, Latinos, and Asians. "Obviously racism is awful and I don't condone it, but it's an important aspect of the character that I felt should be acknowledged. Despite my incessant lobbying, however, [director] Joss [Whedon] didn't think it belonged in the film. Needless to say I was disappointed but I'm still proud of my work."

1. "Nigger"
"When Black Widow sees a successful, confident black man like James Rhodes [played by Don Cheadle]," Johansson said, "she feels so threatened that she just has to demean him. It's ugly, but it really shows how insecure she is in her own skin. I thought it was great, but Joss made me do the scene again without the slur. Maybe there was some issue with the movie keeping a PG-13 rating. To me, that's a cop-out. Life isn't PG-13."

2. "Heeb"
"Thinking about Ultron's plans for world domination, the obvious analogy Black Widow is going to make in her own mind is with the Jews," Johansson said. "That's why I thought it was appropriate for her to call Ultron a 'conniving metallic Heeb,' but Joss disagreed."

3. "Camel Jockey"
"Ultron is essentially a terrorist," Johansson said, "and I don't think Black Widow would be able to resist the urge to say something like 'camel fucker' to him. Ultimately I went with 'camel jockey' because it's PG-13, but even that was apparently too much and it got cut."

4. "Wetback"
"I know it's a comic book movie," Johansson said, "but it should still try to be as realistic as possible, right? There is simply no way Black Widow could go almost two and a half hours without saying 'wetback.'"

5-13. "Zipperhead" (9 times)
"Dr. Helen Cho [played by Claudia Kim] is a beautiful Asian woman, and she's a brilliant scientist," Johansson said. "Black Widow sees her as a romantic rival because Black Widow has feelings for Dr. Bruce Banner, who is also a scientist, and deep down she's worried Dr. Cho might be a better match for him. Predictably, she reacts to her feelings of inadequacy by fixating on Dr. Cho's race and lashing out at her, over and over again. I honestly can't believe this didn't make it into the movie. Cutting 'nigger,' I understand, but this? This really should've been in there."

When asked to comment on Johansson's ad-libs, Whedon said: "I don't know what any of that was about. Maybe Scarlett was on some medication and had taken too much, or maybe she needs to be put on some medication."

Johansson said she hasn't given up on getting a fully-developed depiction of Black Widow on film: "There's always Avengers 3. Thanos will definitely push a lot of her racist buttons."