“There Is No Such Thing As A Brontosaurus,” Exacting Dad Informs Disillusioned 8 Year Old Son 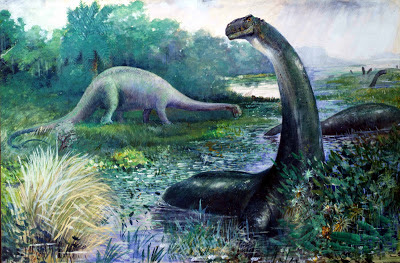 PITTSBURGH—A local 8 year old boy’s budding fascination with dinosaurs was dealt a serious blow yesterday when his father bluntly informed him that there is no dinosaur called “Brontosaurus.”

Bob Troutman was sitting on the couch reading a newspaper after dinner Monday evening when his wife Debra asked their son Kevin what his favorite dinosaur was. Kevin, who was playing with dinosaur toys on the living room floor at the time, held up the figure of a long-necked herbivore and said enthusiastically “Brontosaurus!” This declaration prompted Troutman to look up from his newspaper and tell his son that “there is no Brontosaurus.”

He advised the third grader that, while it is true that in 1879 paleontologist Othniel Charles Marsh announced the discovery of a new species of dinosaur which he called Brontosaurus and unveiled a near-complete skeleton that captured the public imagination, one must never forget that Elmer Riggs subsequently published a paper in the 1903 edition of Geological Series of the Field Columbian Museum arguing that Brontosaurus was exactly the same as another species Marsh himself had discovered in 1877 and named Apatosaurus.

Over his son’s loud sobbing and his wife’s pleas to “just let it go,” Troutman went on to explain that Riggs’s opinion has come to be universally accepted and that, according to rules of the International Code of Zoological Nomenclature, the name Apatosaurus takes precedence because it was published first and is hence the dinosaur’s official name.

After receiving this information, Kevin dropped his toys and ran out of the living room in tears. He was last seen throwing a rock through the window of a warehouse down the street from his home with two other boys whom his grandmother has described as “juvenile delinquents.”

Troutman reportedly spent the remainder of the evening composing a long discourse intended to refute his 6 year old daughter’s continued belief in the Tooth Fairy.
Posted by James J. Hamilton at 4:45 PM